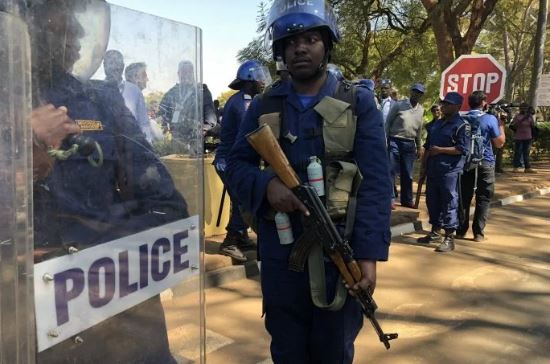 An armed robber who was part of a gang that was targeting gross border smugglers coming from South Africa was shot dead by the police following a shootout.

Four other members of the gang which had been terrorizing motorists along the Beitbridge – Masvingo road were arrested following the firefight. The police have since launched a manhunt for the rest of the gang members.

The shootout between the police and the armed robbers occured on Friday morning near Lutumba Business Centre.

State-owned publication ZTN News reports that the gang used to target border jumpers and cross border smugglers who used gates 2, 5, 7 and 8, along the Limpopo River to illegally enter the country from South Africa.

The gang’s reign of terror came to an abrupt end when the police swiftly reacted to a report of an armed robbery in progress near the Litumba Business Centre.

The police promptly cornered the robbers and apprehended four members of the gang following a brief gunfight.

“We cannot give more details at the moment and our officers are still busy on the ground conducting further investigations.”

Of late, the country has been experiencing a surge in cases of armed robberies, particularly in the southern parts of Zimbabwe near the border with South Africa. The robbers have been mainly targeting service stations and other businesses which deal with high volumes of cash.

On Thursday, a gang of armed robbers pulled off a brazen robbery of a cash-in-transit vehicle outside a Choppies Supermarket in Bulawayo. The gang made off with seven trunks of cash after pulling off the daring raid in broad daylight.