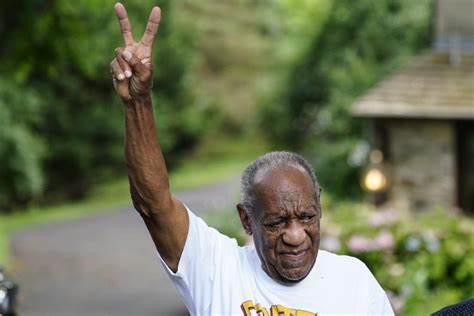 Cosby (83) is best known for starring in the 1980s TV series The Cosby Show and was once known as “America’s Dad”.

He had served more than two years of a three to 10-year sentence at a state prison near Philadelphia after he was found guilty of drugging and molesting ex-basketball player Andrea Constand.

Dozens of women publicly accused Cosby of sexual assault, but he was only tried criminally for the incident against Andrea Constand.

His conviction in 2018 was widely seen as a landmark moment in the #MeToo movement.

In a verdict issued on Wednesday, Pennsylvania’s highest court found there was a “process violation” because Cosby’s lawyers had made an agreement with a previous state prosecutor that he would not be charged in the case.

Following his release from prison, there were mixed reactions on social media. Here are some of the comments from Twitter;

Bill Cosby is a rapist, whose constitutional rights were violated. Much as I despise the outcome of this case, it is legally correct. The original decision to grant him immunity was wrong, as was the subsequent media-fueled decision to prosecute. Prosecutors let the victims down. https://t.co/W7zcotyv2l

Believe and support those who speak up.

Allison Mack gets 3 years, 3 fucking years, for destroying the lives of countless women. ( 25 wouldn’t have been enough)

today has just been a terrible day to be a woman in America from bill Cosby being free, James Franco reaching a settlement, allison Mack getting only 3 years and now this… the court system sucks in helping and protecting women. https://t.co/iYBq6iGQ2H

I don’t even know what to say about the Bill Cosby horror show.

I’m so sorry to all of his victims who are undoubtedly traumatized by this news.

And I’m sorry to all victims of sexual assault who feel this pain deeply.

If you think Bill Cosby has a lot of victims, wait until you hear about Hillary Clinton.

When due process is enough to overturn Bill Cosby’s sexual assault conviction – but not enough to stop Ledell Lee’s execution, who maintained his innocence to the end, with recent exculpatory evidence identifying another man’s DNA on the murder weapon – it’s wealth privilege. pic.twitter.com/dLXTfcEAIm

https://platform.twitter.com/widgets.js
Articles you may want to read: