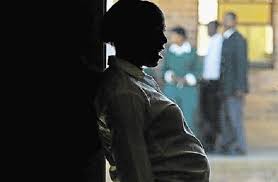 A 17-year-old Bulawayo boy reportedly impregnated his 15-year-old sister after he sexually assaulted her, iHarare has learnt.

It s alleged that the teenage boy would wake up during the night and sneak into his young sister’s room before caressing her while asking for s_ex.

A relative who requested anonymity told B-Metro that the girl never disclosed the matter to anyone or screamed when her brother sneaked into her room.

” The funny thing is that when he got into her blankets she never screamed or reported the matter to any family member. They would have s_ex and after that, he would return to his room and they would pretend as if nothing happened.”

According to the relative, the siblings have been reportedl seeing each other since June this year.

The sexual affair was discovered last week after the girl fell ill and was rushed to the hospital.
She was tested for pregnancy and she tested positive.

After being questioned by her family, the girl maintained that her brother is responsible for the pregnancy.

The family member said that after a family meeting, it was agreed that the boy should be reported to the police.

The matter was reported to the police leading to the arrest of the teenage boy.

“I can confirm that we arrested a teenage boy for allegedly raping and impregnating his young sister. Investigations are still in process,” she said.

In a related matter, iHarare had reported that a Rushinga man shocked villagers recently after he confessed to bedding his sister so that she could ‘receive her healing’.

David Jonasi of Chitange area revealed that his sister had not been feeling well for some time and after visiting some spiritual healers he was instructed to have s_ex with her.

The sexual healing process started while Jonasi’s sister was still at her husband’s. This was before she was sent to her parents’ home so that the family could help her get medical attention.

Woman Hangs Out With Ex-Hubby, Cuts Cake To Celebrate Divorce