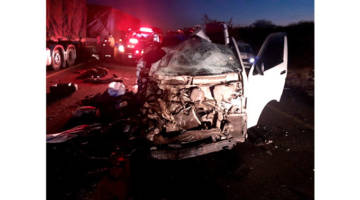 A bus transporting Zimbabwean returnees collided head-on with a minibus between Musina and Makhado in South Africa this morning.

It was reported that four people died on the spot while 10 others were injured.

The accident happened around 5AM, The Chronicle reports.

The publication reports that in a media statement, Limpopo’s Department of Transport and Community Safety said the minibus driver and three passengers died on the spot.

The driver of the minibus is said to have lost control before colliding head-on with an oncoming bus.

The minibus driver was on a high speed chase with the police after he reportedly refused to stop at a security check point.

It is alleged that the accident happened during the chase.

Two people were critically injured, while two others escaped with serious injuries, and the other six were treated for minor wounds.

Starting from  Friday New York residents who get their first vaccine dose at a city-run vaccination site are set to get a $100 incentive.

iHarare had also reported that a recently bereaved family from Bulawayo suffered another blow when they discovered that their mother had been buried by another family following a mix-up at a funeral parlour.

The family was forced to exhume the body to allow them to conduct the burial.

The incident affected the Magagula family from Bulawayo’s Emakhandeni suburb.