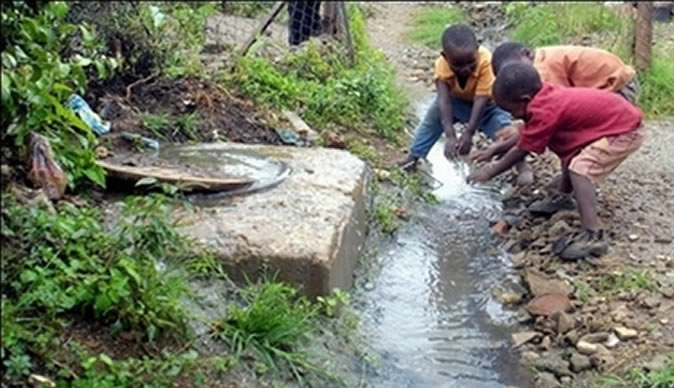 There were horror scenes on Saturday when a baby boy was found dead in a burst sewer pipe at a primary school in Bulawayo.

The body of the dead baby popped out of a sewage pond at Lobengula Primary School. The baby is suspected to have been flushed down the toilet within 12 hours of the discovery in what appears to be a case of infanticide.

The gruesome discovery was confirmed by the police in Bulawayo. Bulawayo police spokesperson Inspector Abednico Ncube told the Chronicle,

“I can confirm that the police are investigating a case of terminating pregnancy where on 29 May, a dead infant was discovered by residents in a sewer at Lobengula Primary School. Investigations over the matter are still in progress and awaiting post-mortem.”

Inspector Ncube appealed to members of the public who may have any information concerning the dumping of the baby to contact the police.

“We are appealing to members of the public who might have information on the case or if you know someone who was pregnant but is no longer pregnant. Please report to the nearest police station. I urge members to desist from killing innocent babies, something can be worked out than killing them,”

Under Zimbabwean law, a woman who kills her baby within 6 months of giving birth is charged with infanticide and not murder. The law states that “the balance of her mind is disturbed as a result of giving birth to the child” and prescribes a sentence of not more than 5 years.

However, magistrates frequently give fewer years with some women usually sentenced to perform community service.  A 33-year-old Mutorashanga woman who made headlines after giving birth to a bouncing baby boy before digging a shallow pit in which she buried him alive, was sentenced to perform 210 hours of community service at a local government school.