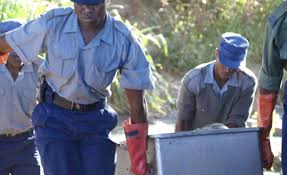 The Zimbabwe Republic Police (ZRP) have arrested a 23-year-old Chitungwiza man after he reportedly assaulted his 17-year-old niece with a leather belt and an electric cabble leading to death.

The suspect, Epharaige Charamba was reportedly punishing the late Winnet Charamba for spending four days away from home.

Circumstances are that on 19 September 2021 at about 0700 hours, the now deceased returned home in the company of a female friend who is only identified as Kudzi after having fled to an unknown address on the 16th of September 2021 when an altercation arose between her (deceased) and Evelyn Charamba who is her aunt.

The reason for the altercation was that Evelyn had found skin-lightening creams in the now deceased’s bedroom.

Upon returning on the 19th of September 2021, the deceased was in the kitchen when she was confronted by the accused person Epharaige who is her uncle over her absence since the 16th of September 2021 to which she said she was with a friend whose name and address she did not disclose.

The accused reportedly started reprimanding the now deceased and took out his leather belt and an electrical cord which he used to assault the now deceased with as a way of administering punishment.

The accused left the kitchen soon after the now deceased went to serve customers at the family’s vending stall that is situated outside the house.

It is further alleged that two hours later the now deceased returned to her aunt who was in the dining room complaining of stomach pains and was advised to eat something and she went to the kitchen where she laid on the floor.

Simon Gerald, 60, who is also an uncle to the now deceased called the now deceased from the dining room where he was but she did not respond. He proceeded to the kitchen a few minutes later where he noticed that the now deceased was not breathing and lying lifelessly on the ground. He alerted Evelyn and Epharaige.

Epharaige then proceeded to ZRP Zengeza where he surrendered himself and is now detained.

1/2 On 19/09/21, Police in Chitungwiza arrested Epharaige Charamba (23) for murder after he assaulted his niece, Winnet Charamba (19) to death with a leather belt and electric cables. The suspect was punishing the victim for spending four days away from home.

The post Chitungwiza Man Assaults Niece To Death While Punishing Her For Spending Four Days Away From Home appeared first on iHarare News.