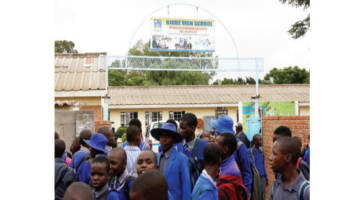 15-year-old form two pupil from Njube High reportedly stabbed his 16-year-old classmate in the left side ribs with a screwdriver on Monday.

A teacher at the Bulawayo school, who requested not to be named, said the incident happened in the schoolyard.

The teacher said while the pupils were leaving school for their respective homes, the assailant, who was wielding a screwdriver in the schoolyard, charged at his classmate and accused him of being in the habit of shaming him in class.

He reportedly accused his fellow classmate of being in the habit of ridiculing him whenever he makes a mistake during their free periods and what angered him most was that he had been shamed recently, causing the whole class to laugh at him.

The teacher said the two traded harsh words much to the amusement of fellow pupils who had surrounded them.

At the height of the fiasco, the attacker stabbed his classmate in the left side ribs and fled leaving the screwdriver stuck in the flesh, the source close to investigations said.

One of the learners, who was watching the feud, rushed to the staffroom to inform teachers who conducted first aid on him to stop the bleeding.

The headmaster took the attacked boy to Njube police station and made a police report leading to the arrest of the attacker.

In a similar incident that recently happened at Lobengula High School, a 17-year-old form four pupil stabbed his 16-year-old classmate on the shoulder with an okapi knife as punishment for poking fun at him while in class.

I Was Drunk: Says Domestic Worker Who Killed His Two Employers Over Salary