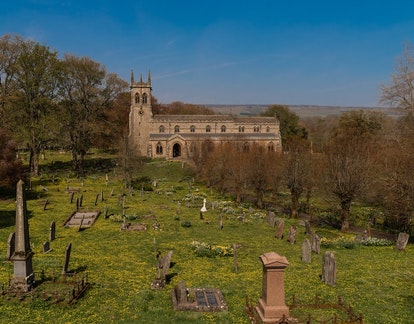 A haunted Rushinga man who was caught  performing secret rituals on his deceased family members’ grave has been fined a beast by a Headman at a Community Court.

It is reported that Norman Munetsi consulted witch doctors after noticing that his relatives were dying one after the other.

However, it is alleged that the witch doctor accused Munetsi of possessing tools like a winnower, snake and an owl that are used in witchcraft.

Munetsi denied the allegations when he appeared before Headman Chimhanda’s Community court. He said the winnower belonged to his brother and the snake belonged to his late father.

” Yes I know the goblins; the winnower belongs to my young brother and the reptile was left by our father.

He then told the court that he did the rituals in question on his deceased relatives’ graves as a way of easing their avenging spirits.

Headman Chamhanda who revealed that such rituals were forbidden in his area asked Munetsi why he came to his territory to perform the rituals when he is from another chiefdom.

Munetsi who now resides at Marymount area in Ward 4 said he relocated some time ago from Chimhanda area. He was then ordered to pay a beast as fine, H-Metro reports.

In other news, iHarare reported that an Upper Six student from Domboshawa is making waves in his community after trying to separate from his second wife. Michael Dzora, the student, is only 20 years of age but has already separated from his first wife.

Michael who owns and drives a Toyota Wish vehicle, claims that many women have been targeting him due to his lifestyle. He alleged that his first wife eloped with him after discovering that she was pregnant. However, when she suffered a miscarriage, he sent her back to her parents.