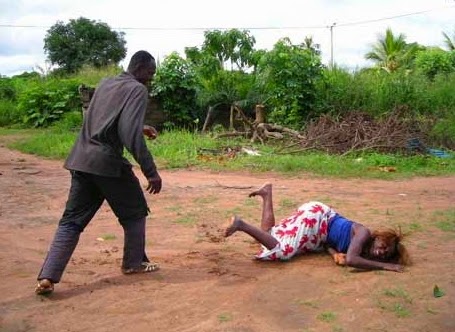 A woman from Bulawayo was left nursing some wounds after her husband whom she had busted performing  midnight rituals assaulted her.

Thando Moyo woke up to the shock of her life after she saw her husband Trust Sibanda (35) sprinkling hot water around their yard.

After he was busted, Sibanda allegedly went on to assault his wife for questioning him about the midnight ritual.

“I can confirm that a 35-year-old man has been arrested after he beat his wife for questioning him on why he was sprinkling hot water around the yard and inside their matrimonial bedroom,” she said.

According to a source privy to the incident, Moyo got shocked after she woke up in the dead of the night and saw her husband going around the yard holding a jug sprinkling hot water mixed with a concoction.

After that, he reportedly got into their matrimonial bedroom and also sprinkled hot water.

Disturbed by what she was witnessing, Moyo who had only wrapped herself with a towel confronted her husband and accused him of sprinkling a concoction around their yard and that infuriated him.

Sparks flew high as Sibanda manhandled his wife and grabbed her towel and threw it away before bashing her with fists on the face.

Sibanda went a step further and dashed outside the house, brought back a 10-litre container which was full of water mixed with the concoction and poured it on her.

Drenched from the concoction Moyo dashed to a police station and made a report leading to Sibanda’s arrest.