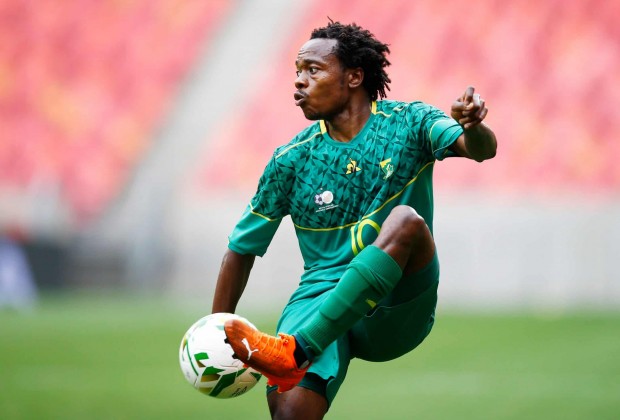 Percy Tau To Be  Unveiled As Al Ahli Player

The speedy winger Percy Tau is said to have ended his engagement with English premier League Club Brighton & Hove Albion. He was spotted by some football fans in Egypt while juggling the ball at the Cairo International Stadium in Al Ahly colours with other teammates.

Percy Tau had a three-year stint with the Seagulls, and on those 3 years, it was loan after loan as he failed to break into the starting eleven. He was loaned out to three Belgian clubs namely Union SG for the first year, Club Brugge for the second year and Anderlecht lastly.

He won player of the season at Union SG and the fans liked him due to his brilliant performances throughout the season. Tau was again a Belgian League winner with Club Brugge and he had a chance to rub shoulders with Real Madrid players (Galacticos) and Manchester United players during Europa games.

Upon his return to his parent club Brighton and Hove, there was hope for him as he showed moments of brilliance against Manchester City in a FA cup match where he was a nightmare for City defenders. Again, he was included in Seagulls squad for the 2021/22 season but he knew that he will not get game time.

The midfielder missed Brighton’s two opening matches against Burnley and Watford which they won 2-1 and 2-0 respectively.

Tau was not part of Brighton’s two first games to buttress his move to North Africa, the midfielder was spotted kicking a ball at the Egyptian giants favourite hunting ground Cairo International Stadium with Al Ahly expected to officially announce their new arrival any time soon. Tau also made changes to his official Twitter handle where it now states he is a former Brighton & Hove Albion player to all but confirm his exit from the English Premier League.

The post Percy Tau To Be Unveiled As Al Ahli Player appeared first on iHarare News.