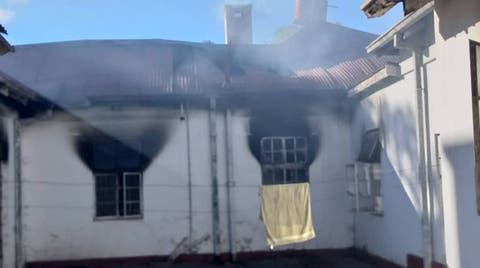 Kwekwe General Hospital doctors and staff members escaped unharmed after their quarters caught fire in the early hours of today.

Nine families including doctors, physiotherapist, nurses and an administrator lost property worth thousands of dollars after the fire razed down their residence at around 3am.

“I can confirm that a fire broke out and razed one of the staff residences and it destroyed property. The staff members, including doctors, lost almost everything as they did not get time to remove their property.”

He said no one was injured adding that the quarters were meant for trainee doctors but due to shortage of accommodation at the institution had been converted into makeshift doctors’ residence.

Masarakufa said when they arrived, it was too late to remove property as it was already reduced to ashes.

Officials from Kwekwe City, ZESA, District Development Committee (DCC) and police were also at the scene assessing the extent of the damage.

Distraught occupants of the hostel were also milling around counting their losses.

The fire destroyed property worth thousands of dollars. Some of the doctors who reside there said that they had lost everything in the fire and only managed to escape with their lives.

In other news, iHarare reported that a horrible tragedy befell a Buhera family in April this year after four minor children were burnt to death when the family’s hut caught fire in yet to be established circumstances.

The sad incident occured in Machaka village under Chief Nerutanga in Buhera.

“He Passed Away Around 2AM”- TB Joshua’s Last Moments