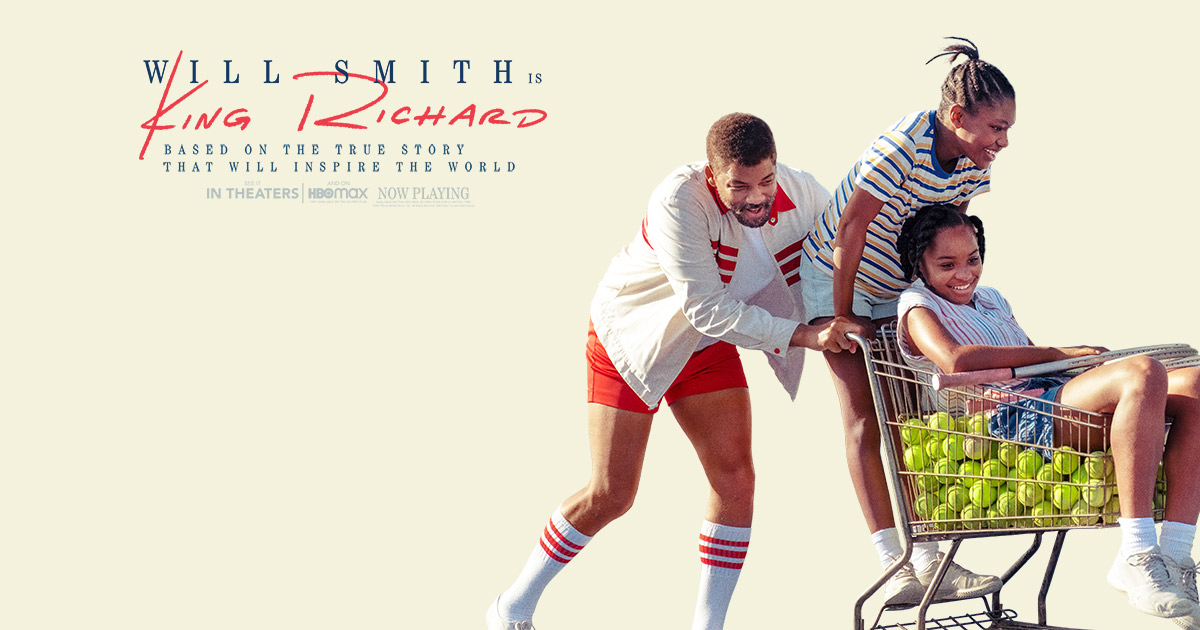 IT has been said that ‘by failing to prepare, you are preparing to fail’, and for some reason, Benjamin Franklin’s famous words have always resonated with me. Don’t really know why. Maybe it’s because the author is one of history’s most famous personalities, or it’s simply due to the fact that I don’t like surprises.

Whatever the reasons, I live by these words.

I only bring it up because the hugely anticipated biopic on the Williams’ sisters Venus and Serena, “King Richard”, is finally out.

However, rather than simply jump into a straight-up review of the HBO Max film, I thought it prudent to offer a guide into other biopics that may enhance and enrich your viewing of the film.

Initial reactions of “King Richard’ have been overwhelmingly positive, with some calling it the film of the year, while others have started to attach Oscar honours for Will Smith.

The film has scored 92% on Rotten Tomatoes, with many praising Smith for his starring role as the head patriarchy of the Williams.

It is mostly about Richard Williams, and the influence he had on the tennis careers of his two daughters, after all.

I would like to note that the biopics I will mention in the instalment are not ranked, nor are there in any way the best in the business.

However, they do have something in common with “King Richard” and watching them will in one way or another enhance your viewing experience of the Williams biopic.

That being said, let’s get into it!

“Battle of the Sexes”

Starting with a more recent biopic-and one closer to the HBO Max film than all of the films on this list- “Battle of the Sexes” is an excellent example of storytelling and starred Emma Stone and Steve Carrell in the starring roles as Billie Jean King and Bobby Riggs.

Set in 1970, at the height of Jean’s powers, as she is fresh off a title win and a jump to the top of the rankings.

Sadly, her latest win pales in comparison to her male counterpart in the prize money department.

Efforts to get this resolved don’t go well, and as such King decides to go off book and start her own league.

Just as the tour starts to get some traction, former world tennis champion and renowned hustler and gambler, Bobby Riggs, sees an opportunity to relive his glory days and challenges Jeans to a tennis match.

Jeans initially refuses, but when Riggs, at the age of 55, humiliates temporary number one ranked women tennis player Margaret Court, Billie Jeans steps up to defend the integrity and pride of the women’s game.

And the stage is set for what goes down as the “Battle of the Sexes” and a winner-takes-all match.

The subject matter, casting and performances in this Netflix film is all well and good, but the story that they tell is what stands out the most.

This film also serves as a tutorial on how bio-pics should be handled, as it stays true to the historical facts of the match, but does lend its own writers creativity to fill in the gaps on the moments and incidents that have no bearing over the story being told.

Carrell is even afforded a chance to bring little nuggets of his persona into the character, as there are moments in which Riggs is portrayed as comic relief.

It’s all satirical, by the way.

Samuel L Jackson’s teen sports drama is on the list for two main reasons, with the first, and most obvious, being its popularity.

The film scored a surprising 64% amongst the critics on Rotten Tomatoes but has since gone to critical acclaim amongst the audience over time.

You cannot talk about sports biopics with alluding in one way or another to Coach Carter.

Jackson stars as Keni Carter, a basketball coach who goes back to his high school, Richmond, and turns a rowdy and diligent bunch of teenagers into one the best teams in their division.

Jackson’s story brought eyes to one of America’s biggest issues as the system did not really give the kids (black community) any chance of a decent education.

Instead, sport was and still is viewed as most black urban youths’ best chance to escape poverty.

Concentrating on the ‘lockout’ was the best course for the film, and it shines in that department.

There are also a couple of good performances scattered throughout the film, with Jackson standing head and shoulder above the rest obviously.

There is a very good chance that you have probably seen and heard of this entry, but “Ali” remains one of Will Smith’s better performances to date.

The key factors to the success of this film are its subject matter, and Smith almost spot-on portrayal of the boxer many consider the GOAT.

The straightforward biopic focuses on ten years in the life of the boxer Muhammad Ali (1964-1974), featuring his capture of the heavyweight title from Sonny Liston, his conversion to Islam, criticism of the Vietnam War, and banishment from boxing.

It also touches on his return to fighting Joe Frazier in 1971, finally reclaiming the title from George Foreman in the Rumble in the Jungle fight of 1974 and the great social and political upheaval in the United States following the assassinations of Malcolm X and Martin Luther King Jr.

If ‘Coach Carter’ is on the list largely due to its popularity, then “Remember The Titans’ is here mostly due to the fact the film is largely viewed as amongst the greatest biopics of all time or GOAT as the term goes.

At the heart of the film’s success was Denzel Washington’s superb performance, the daring nature of its subject matter (race) and how well it was handled.

It was the summer of 1971 and a newly integrated school in Virginia, T. C. Williams High School, assigns Herman Boone (Washington) as head coach of the institution.

Boone was originally supposed to lead the black high school’s football team but now has to lead an integrated team and work with Bill Yoast (Will Paxton), who previously led the white high school.

This causes problems on two fronts as Boone, firstly, has to find common ground with his predominately white coaching department, and also ease the racial tension caused by the new integrated system.

Race is one of the sensitive but ideal subject matters in life and film, and credit here should go to writer Gregory Allen Howard at how he handles it.

Yes, most of the facts were laid bare, given that this is based on a true story, however, writers don’t really get enough credit for filling in the gaps and how they managed to construct entertaining, yet factual dialogue.

The performances of all concerned here should never be downplayed or ignored.

Paxton and Washington put up superb performances, and their chemistry is the driving force of the film.

Not every biopic ticks off all the boxes, and “Blindside” is one perfect example.

Don’t get me wrong, I thoroughly enjoyed the flick and it did good business on the box office making a whopping US$309 million.

Star Sandra Bullock (Leigh Anne Tuohy) even won an Oscar for her efforts.

The film is based on the upbringing and career of Michael Oher, a former offensive tackle for the Baltimore Ravens in the NFL.

He chronicles how Oher was adopted and schooled by the Tuohy family and went on to become a first-round pick in the 2009 NFL Draft.

It obviously leaves out the draft and NFL career of Michael Oher, instead focusing on his rough and troubled upbringing right up to meeting and getting adopted by the Tuuohys.

It’s quite an entertaining and heartwarming story, right up to the point in which the subject matter (Oher himself) had some misgivings about how he was portrayed.

In the time since the release of the movie, Oher has made his feelings about the project quite clear.

Oher did not like the way he was portrayed, how the movie simplified his struggles and, in some instances, exaggerated his actual story.

Breaking down the new Spiderman: No Way Home trailer

Reasons To Be Excited, and Concerns About Marvel’s Phase Four so Far