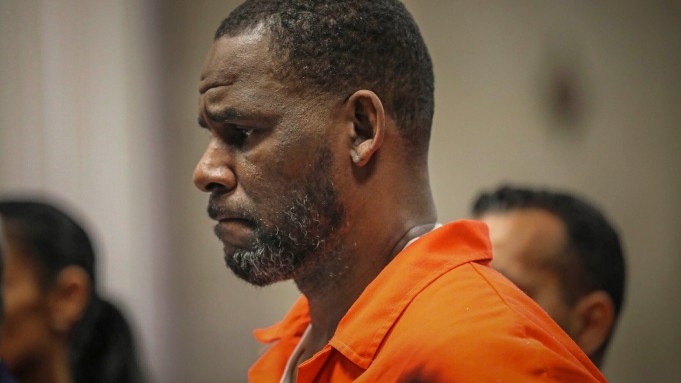 Musician R Kelly has been found guilty of nine counts of sex trafficking and racketeering. According to the New York Times, R. Kelly was convicted by a jury on Monday, which found him guilty of being the ringleader of a decades-long scheme to recruit women and underage girls for sex.  The singer now faces life in prison.

Kelly is reported to have sat motionless in the courtroom as the verdict was read, his facial expression obscured by a mask.

In the New York trial that began Aug. 18, Kelly faced federal counts of human trafficking, racketeering, child pornography, kidnapping and forced labour. The former music star has denied all allegations against him and pleaded not guilty. During the trial, the prosecution sought to prove that not only is Kelly a predator, but his team has long enabled his behaviour.

Over the course of the five-week trial, the prosecution brought nine women and two men to the stand to tell their accounts of Kelly’s sexual, physical and mental abuse, along with 34 witnesses, including former employees of Kelly. Kelly will not take the stand, per the Times.

According to the Associated Press, accusers testified that Kelly allegedly locked a radio intern in a room where she passed out and he sexually assaulted her, videotaped a woman wiping faeces on her face as punishment for not following his rules and knowingly gave multiple people herpes without informing them of his STD status.

In one of the most explosive moments during testimony, a witness alleged that they had seen Kelly sexually abusing late R&B star Aaliyah in 1993, when she was only 13 or 14, according to the AP. That same witness also testified that Kelly began to sexually abuse her when she was 15.

Part of the prosecution’s evidence included a fake marriage license that they alleged Kelly and his team used to wed the two when Kelly came to believe he had impregnated her, the AP stated. The faked license claimed that Aaliyah was 18, when in reality she was only 15. The prosecution alleged that Kelly wanted the sham marriage so that he could make Aaliyah get an abortion, out of fear of criminal consequences, according to the Times.

The defence presented four character witnesses, including former employees, an audio engineer and an accountant

The R&B star, whose legal name is Robert Sylvester Kelly, had been the subject of different se_xual abuse allegations for nearly two decades, with some of the alleged acts dating back to 1998.

A jury in 2008 acquitted Kelly of child pornography charges stemming from a video showing him having se_x with a girl as young as 13, prosecutors claimed at the time. Kelly faced 15 years in prison for that charge, but the young woman in that claim denied it was her and did not testify.

This is the first of several cases against R. Kelly. He faces another federal case in Chicago — which could tack on decades to a prison term — along with state sex crime charges in Illinois and Minnesota.  Interest in Kelly’s case was revived in large part due to the Lifetime series “Surviving R. Kelly.”

R. Kelly’s lawyer said the defence team would consider appealing the verdict that could send his star client to prison for life. The lawyer, Deveraux L. Cannick, argued that the prosecution’s case was “replete with inconsistencies.”