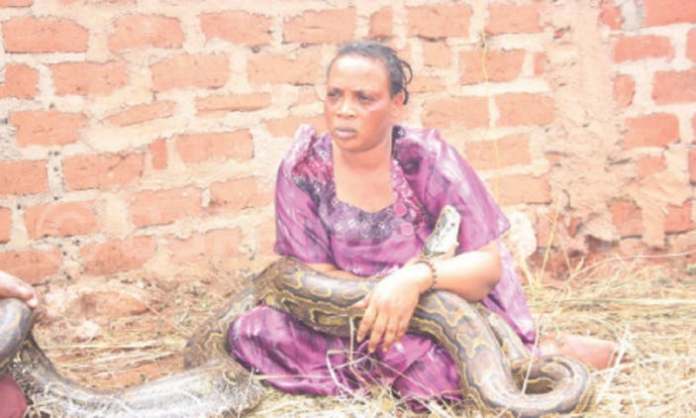 Shocker As Elderly Woman Forces Granddaughter To Breastfeed A Snake

In a rather bizarre development, an elderly woman from Chimanimani is alleged to have been forcing her granddaughter to breastfeed a snake.

The matter only came to light after Portia Dzemura, who is in her 20s approached Chief Saurombe’s courts revealing that she was being forced by her grandmother Gogo Dalice Dzemura to breastfeed a snake that appears and disappears.

She revealed that milk oozes out of her breasts every time when the snake is about to breastfeed.

Gogo Dzemura confessed to practising witchcraft, causing misfortunes in the village and forcing her grandchild to breastfeed a snake when she was summoned to appear before Chief Saurombe to answer to witchcraft allegations.

She, however, did not reveal why she was forcing Portia to breastfeed the snake.

Portia’s mother revealed that due to circumstances that she has been subjected to her child is a troubled woman as society now views her as an outcast. She said:

It is a strange and sad development. We have heard of witchcraft cases before, but this one is extraordinary. We hope that this matter will be put to rest so that my daughter can be freed from this bondage.

She is a young woman who looks forward to getting married and having a family of her own. Most men are now shunning her because of this. Those who were close to her are now distancing themselves from her.

Chief Saurombe has since directed three traditional healers and exorcists to conduct cleansing ceremonies for both Gogo Dzemura and Portia.

In an almost similar incident reported by iHarare,  a Chimanimani woman sent tongues wagging after she was spotted at her friend’s house breastfeeding a giant snake.

Gogo Nenohwe was spotted by a 12-year-old girl as she breastfed the snake while uttering names of fellow villagers whom she wanted her pet to deal with.

Madzimai Mukono then revealed that a snake that resides at Gogo Sithole’s homestead is used by the ladies for witchcraft.