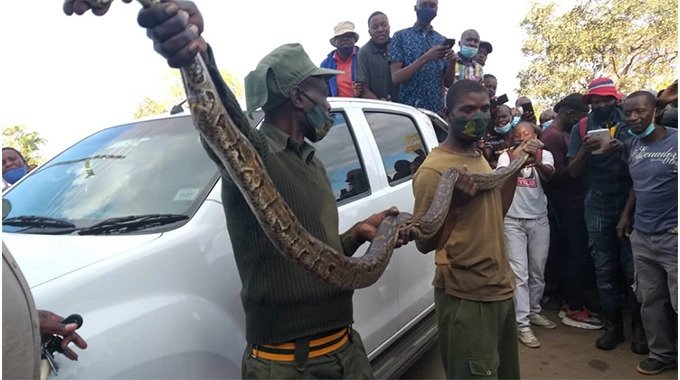 The Kwekwe man who created a buzz in the Central Business district on Tuesday after he was found in possession of a huge python has denied having any connection to the reptile.

Tatenda Mutema (31), a soldier based at 5 Infantry Brigade just outside Kwekwe claims he is not the owner of the snake.

Speaking after his arrest, Mutema told The Chronicle that when the owner of the vehicle gave him the car to drive he wasn’t aware that there was a huge reptile stashed in the car.

He claims that he doesn’t know the owner of the vehicle well, all he knows is that he owns a plot near the army barracks.

“I do not even know the name of the owner of the car to be honest. I met him one day when I was on my way to Kwekwe from the barracks.

He asked me if I had a driver’s licence which I produced and he gave me the vehicle to drive,” narrated Mutema.

He said on the following day, the owner of the vehicle asked him to drive him to Bulawayo.

“I drove him to Bulawayo together with two other women. Upon arrival, he and the ladies hopped into a brand-new Honda Fit Hybrid. He then asked me to drive back to Kwekwe as he said he was on his way to South Africa,” said Mutema.

He said the vehicle owner instructed him not to use the money he collected from passengers but to take it to his family at the farm.

Mutema claims that he did as he was instructed and left some cash at the owner’s farm before driving away.

He revealed that on his way from the farm, he gave another man a lift whom he asked what exactly the owner of the vehicle did in life because he had seen brand new cars at his farm.

The man allegedly told him that all he knew was that the man was a sangoma.

Mutema said he never took it seriously and went about his business.

However, disaster struck when Mutema picked up a female friend and decided to use some money he had collected to buy the friend lunch.

“I took a US$10 note to buy lunch. Upon returning I opened the door and was shocked to see part of the dashboard broken. When I checked at the back seat I noticed a huge snake and quickly grabbed the girl and locked the car,” he said.

He refuted claims that he fled from the scene after the snake was spotted inside the car.

“I did not run away, I was there when the rangers removed the snake. I was still in a state of shock and I feared the people’s response,” he said .

Mutema only handed himself to the police after the snake was successfully retrieved from his Toyota Wish by rangers from the Zimbabwe National Parks and Wildlife Authority (Zimparks).

The post “The Snake Is Not Mine” Kwekwe Python Man Speaks Out Following Arrest appeared first on iHarare News.