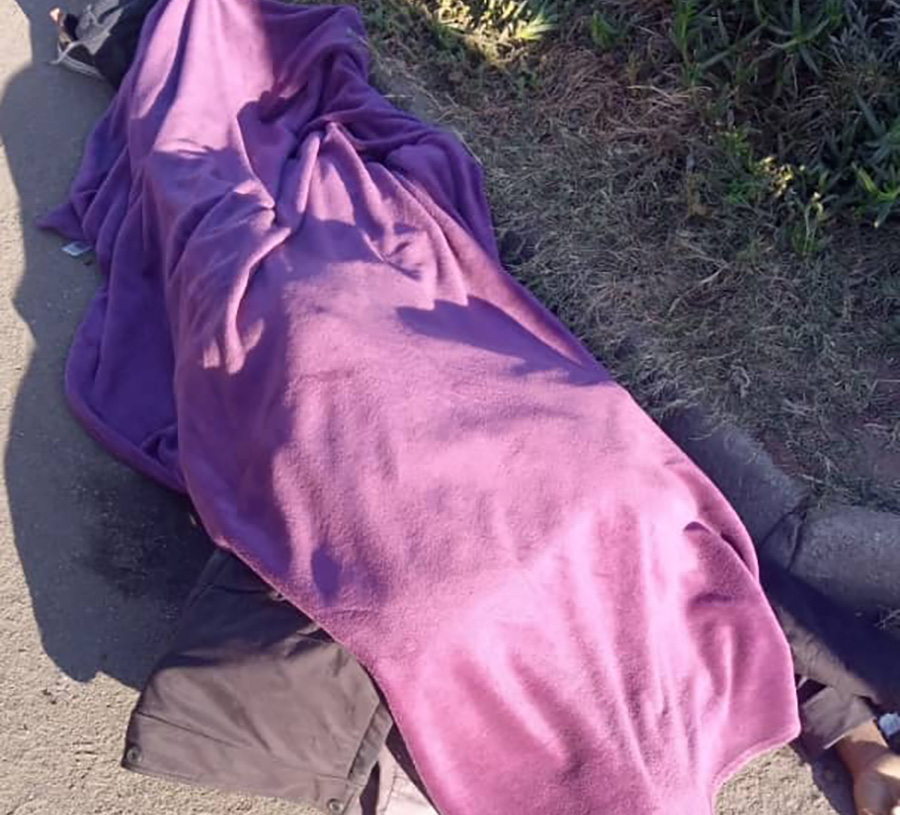 The body of the yet-to-be-identified tout(Photo Credit: ZimLive)A Harare bus-rank tout was murdered in cold blood by a bus crew in a fight over passengers, early Wednesday in Harare.

The body of the unnamed man was still at 4th Street bus terminus at 7 AM as police interviewed witnesses.

“He was stabbed in the chest during a fight over passengers at around 5 AM. He was tussling with a C.A.G Travellers Coaches bus crew,” said the witness.

The witness added that following the incident,  the C.A.G bus left for Mutare without notifying any relevant authorities.

The dead man’s body was covered with a purple blanket as police canvassed the area for witnesses.

This is not the first time touts and bus crews have engaged in nasty fights over passengers. As a result of these nasty fallouts, some travelers have lost property or have been roughed up by the touts who often drag them – against their will – to a particular bus.

Early this year, the Zimbabwe Republic Police arrested four touts who were involved in the  manhandling and harassment of a defenseless woman. The woman’s cries for help touched many in a video that went viral on social media recently. The incident occurred at Dulibadzimu Rank in Beitbridge.

The four, Maxwell Kamuda (42), Lazarus Chingova (44), Micheal Mlambo (35), and Worry Muranda (age not given) were all sentenced to six months in prison.

Meanwhile, in an almost similar event, a  63-year-old Chitungwiza man died last year after he was assaulted by three touts along High Glen Road in Harare.

Anias Chiyangwa of Zengeza 1 was severely assaulted by touts after he refused to board their Kombi.  The touts allegedly wanted to force him to board their unregistered commuter omnibus.

The post Tout Murdered In Cold Blood By Bus Crew In Fight Over Passengers appeared first on iHarare News.