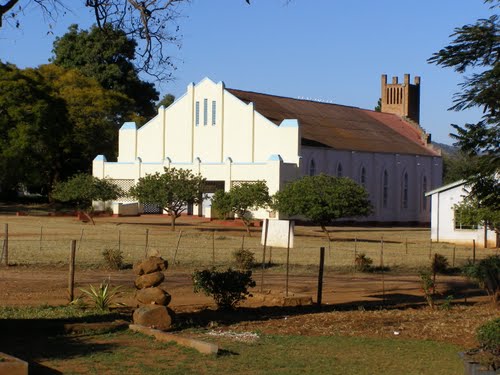 There was chaos at Hartzell High School in Mutare after Form six pupils reportedly clashed with their Form four counterparts over a girlfriend.

The Manica Post reports that according to a source, it all started after pupils clashed over a girlfriend. A form four pupil is alleged to have snatched a form 6 girl from her boyfriend.

The girl’s boyfriend is in form 6 and his counterparts felt that they were being disrespected by their juniors.

” Things came to boil on Monday evening after the study period. The pupils clashed resulting in the damaging of the fence, while a few window panes were smashed. No one was injured except one young boy who fell during the melee. He was not badly injured,” said the source.

It is also alleged that there has been a demand by the advanced level pupils to have a separate dining room and this could have sparked the violence.

Manicaland Provincial Education Director, Edward Shumba confirmed the incident but he said investigations were in progress.

“What I have gathered from the Mutasa District Schools Inspector is that there was violence on Monday night at hartzell High School. The matter is still under investigation by authorities at the institution. We were also made to understand that Form Six pupils at the school clashed with their form four counterparts resulting in violent scenes.”

United Methodist Church education secretary, Reverend Munyaradzi Timire on Thursday denied commenting on the matter after saying he was yet to receive a full report on what transpired.

Kudzai Mushonga Gushes Over His Bae Khanyi Mbau On Her Birthday